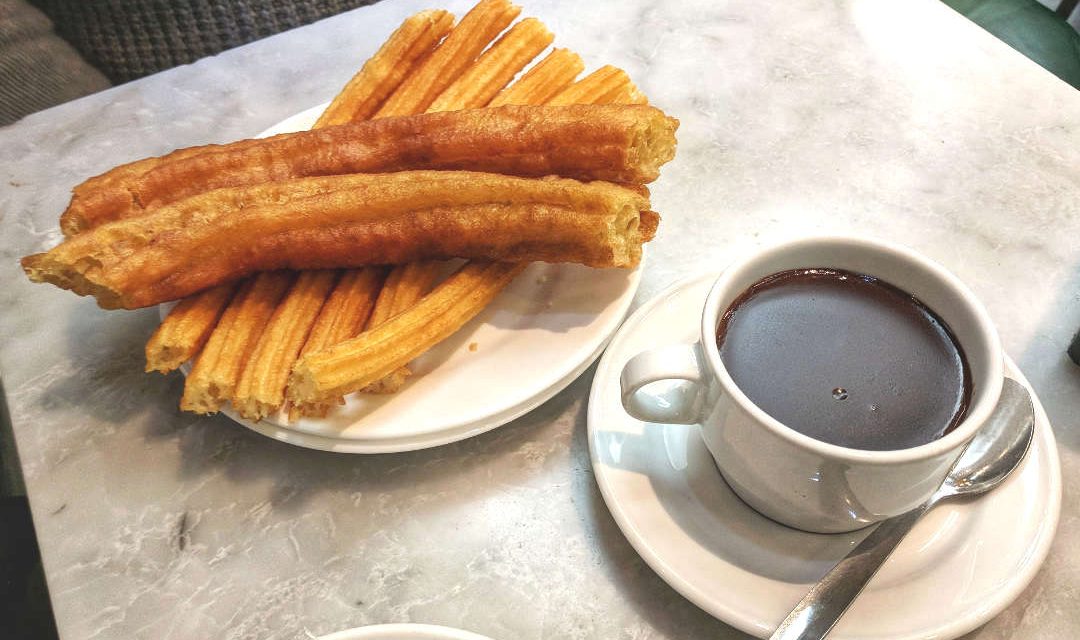 Churros, one of the many childhood desserts that I coveted while growing up. I would always look forward to eating these cinnamon and sugar covered long deep fried dough sticks at the local amusement parks. Later I would find them at the local warehouse club for a fraction of the amusement park prices. Sure they were slightly different but at the same time offered another way of eating it; with soft serve ice cream. And in time I found out that churros is not originally an American sweet. 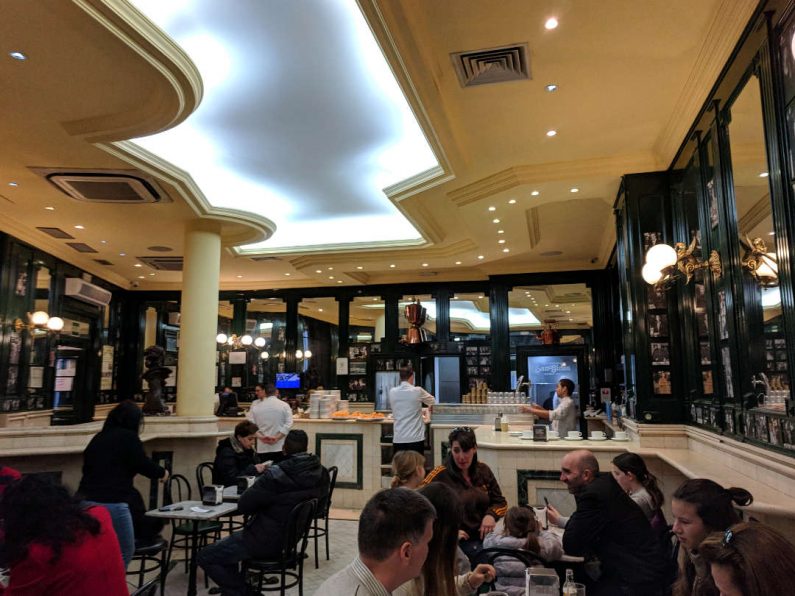 The point of origin of churros culture, as it turns out, is a breakfast or any other time activity found in Portugal, Spain, and other Spanish colonized country.

And wouldn’t you know it, that we happen to be flying into Madrid to take in and eat up the culture. First thing we had to do other than check into the the hotel is look for that sweet sweet churro. Walking to this institution of churros, we passed many other places that sold churros. I would have imagined that churros being considered a potential breakfast item that there would be many people in line; I was wrong.

We had done as the instructions had told us and walked passed the Plaza del Sol to what looked like an abandoned alleyway. Judging from all the articles and reviews, I had expected a line wrapped around the corner. Not knowing exactly where to go, we walked through the neon lit doorway to find that the area had a group of people who looked like they were on a tour. After waving over a staff member, we were told to go next door.

Walking through the non neon lit doorway we found ourselves in a dark mirrored room reflecting it’s photograph lined walls and tiled everything else. As we got to the counter, I was surprised by how cheap the churros were, so we ordered a bit of everything for about $7 USD (under 6 Euro):

That’s a deal compared to how much I used to pay for a single churro at an amusement park. We then found our seats to impatiently wait. It was exciting to sit there waiting for the mother of churros in this energetic room filled with locals and, I imagine, tourists alike in different stages of churro consumption. 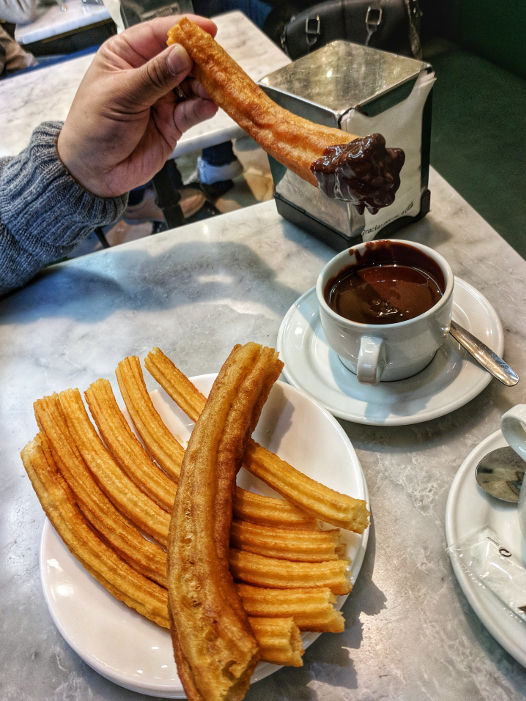 Did you know that there was more than just churros? There’s the churros that you probably had growing up in the states, like myself, arm length deep fried crispy dough covered in copious amount of cinnamon and sugar.

But in Spain they do things a little differently. They make churros by extruding large spirals of dough into vats of hot oil which they then cut down to size. Most places outline the times at which they will make them so that you can coordinate your schedule to get the freshest churros possible.

But if you think they stopped at making churros, you’d be wrong just like me. They make something called Porras! It’s a thicker, larger, more airy sibling of the smaller and denser churro.

Surprisingly, after taking a bite out of their porras, my taste buds quickly made me think of Chinese Fritters called Youtiao. Actually, if you offered them side by side to me or anyone else, I’m pretty sure people would have a hard time distinguishing them from one another. I wonder if there’s a connection somehow? 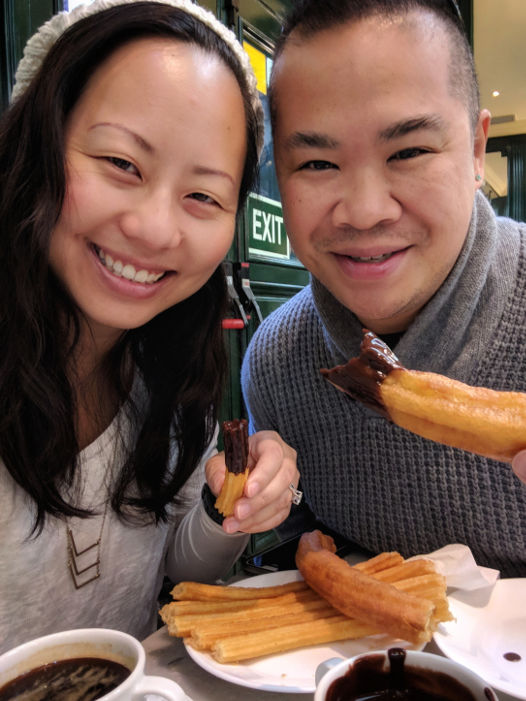 How sweet is your sweet tooth? My entire world of churros consisted of cinnamon and sugar. I have yet to try the recent variation that’s made with a filling. Maybe you were lucky enough to try the ones that were stuffed with some kind of sweet goodness. Or maybe you even tried something like myself and dipped churros into something else like soft serve ice cream.

Never in my wildest imagination did I think to dip churros or anything else in hot chocolate. Of course, the hot chocolate that I’m familiar with is the sweeter and thinner (ie watery) variety made with milk. I thought milk would have been as rich as it could possibly get.

I discovered that in Spain they serve their hot chocolate thick, rich, and dark. To be honest, this wasn’t my cup of tea at first, as it were, however the more I dipped my churros into that dark concoction, the more I came to enjoy this new combination. The contrast in texture and taste brought out the sweetness in the chocolate, and the chocolate added another dimension to the deep fried pastries.

I’ve had them in the US, the Philippines, Mexico, Spain and Thailand. While popularly enjoyed by the world’s Latin populations, people all around the world can’t seem to get enough of churros. And with the churro diaspora has come just as many different ways to enjoy them. So get out there and find your favorite way of eating them.

Maybe you’ll LOVE them all!?

I know that I have yet to eat a churro I didn’t like.

Now that we’re here in Madrid, I’m going to try out as many different churros as I possibly can; without getting sick…

Where’s your favorite place for churros!?!? 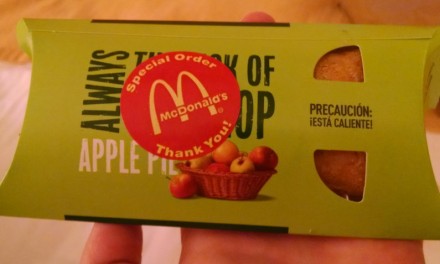 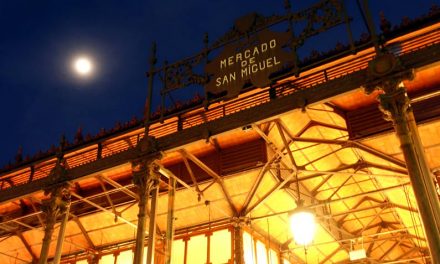 Eat All of Madrid at Mercado de San Miguel